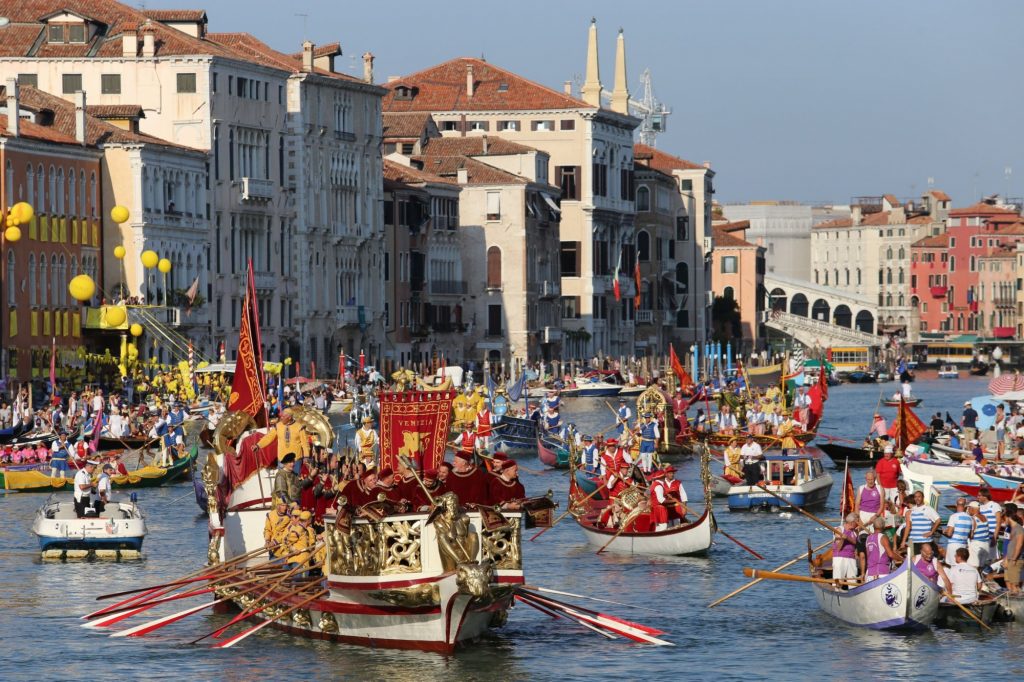 The Historical Regatta is the main appointment of the annual Voga alla Veneta competition calendar, a unique discipline in the world practiced for thousands of years in the Venice lagoon.

The Historical Regatta is the main appointment of the annual Voga alla Veneta competition calendar, a unique discipline in the world practiced for thousands of years in the Venice lagoon.

Today it is made even more spectacular by the famous historical procession that precedes the races: a parade of dozens of sixteenth-century boats, multicolored and with gondoliers in costume, carrying the doge, the dogaressa and all the highest offices of the Venetian Magistrature, in a faithful reconstruction of the glorious past of one of the most powerful and influential Maritime Republics of the Mediterranean.

Today the four competitions are divided by age categories and by type of boat: the most famous and exciting is the regatta of the champions on gondolini, which speed in the Grand Canal to the finish line in front of the famous “machina”, a spectacular floating stage in front at the Ca ‘Foscari palace.

From the origins to today The regatta has always involved citizens and foreigners. The first historical evidence dates back to the mid-thirteenth century and are related to the Feast of the Marie, but it is likely that, in a city like Venice always projected on the sea, the race has had more ancient origins, dictated by the need to train crews oar. Much later is the first visual image: a group of boats with the inscription “regata” can be seen in the Venice Map by Jacopo dé Barbari from 1500. Since then, the regatta will be one of the favorite themes for landscape painters to represent a celebrating Venice.

The etymology of the word regatta is uncertain, but it is probable that it derives from the term aurigare (to compete), used and attested in the XVI century as a synonym of competition. From Venice the term passed in the main European languages ​​always indicating a competitive competition on boats. Canaletto, “The Regatta on the Grand Canal” In ancient times the regattas were divided into challenges between boatmen or gondoliers and large regattas (the latter were motivated by exceptional religious or secular city celebrations).

The expenses to set them up, however, always weighed on individuals. Not infrequently they were called for the liberality of foreign princes. In 1797, the Republic fell, the regattas did not cease. In that same year the Venetian democratic government held two competitions.

The modern regatta was born in 1841, when the expenses were not due to private individuals but to the public. In that year the City of Venice asked the Austrian authorities to annually announce a “boat race along the Grand Canal by the Municipality to encourage the gondoliers to honor their vaunted dexterity”. With the annexation of Venice to the Kingdom of Italy (1866), contrary to what happened previously, the regattas had as their purpose the celebration of the glorious past of the Venetian Republic. But it is only since 1899, on the occasion of the III International Biennial of Art, that – on the proposal of the Mayor of Venice, Count Filippo Grimani – the regatta will assume the name of “historical”. To tie Gondolini regatta The regatta consists of various races on particular types of boats (in ancient times it was also disputed on galleys, peatoni, burchi, as well as on agile boats with two or more oars). Currently the most followed and exciting is the regatta of gondolini.

On the occasion of the “Historical Regatta”, Venice sees the San Marco basin and the Grand Canal teeming with boats of all kinds, from which citizens attend the competition with partisan animosity. To face and contain the disturbances the regatta was formerly preceded – as a service of order – by peote and bissone (parade boats), from which some patricians placed in the bow, equipped with arches, threw more unruly balls to the boats terracotta (balote), usually used for hunting in the lagoon to marsh birds. Currently the bissone have the sole function of opening the historical parade. The crucial points and the fundamental stages of the regatta are: – the spagheto (the string) stretched at the start before the gardens of Sant’Elena; – the paleto, a pole fixed in the middle of the Grand Canal in front of the Santa Lucia railway station, where – according to tradition – the winners are determined; – the machina, a floating building that rests on a barge anchored in the vault of the canal in front of Cà Foscari, rich in polychrome and gilded carvings, a place for the conclusion of the races and for the awarding of prizes consisting of money and flags. The latter, the most sought after, are four in many different colors: the first is delivered the red, the second the white (anciently heavenly), the third the green, the fourth the blue (anciently yellow on which stood a pig, animal considered not fast).

The historical procession It recalls the welcome given in 1489 to Caterina Cornaro, wife of the King of Cyprus, who renounced the throne in favor of Venice.