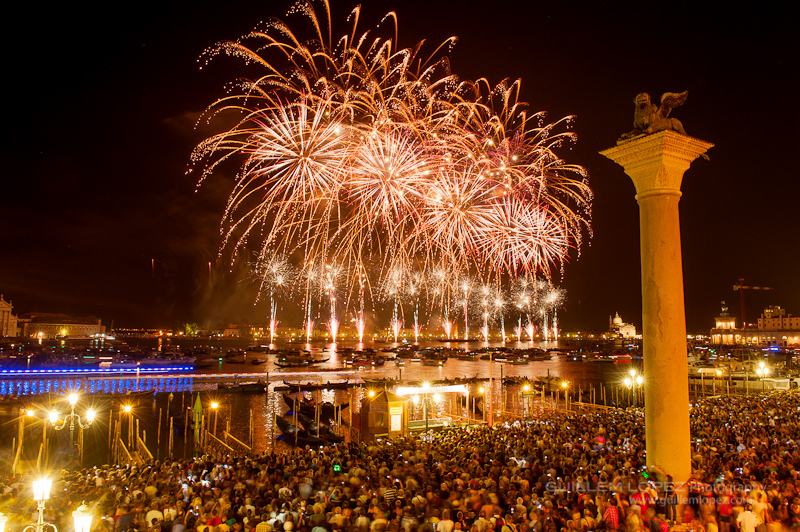 Tradition has it that history began in 1575, when the city was hit by the plague that made about 50,000 dead, including the famous painter Tiziano Vecellio (at the time the inhabitants of Venice were about 170,000).

Tradition has it that history began in 1575, when the city was hit by the plague that made about 50,000 dead, including the famous painter Tiziano Vecellio (at the time the inhabitants of Venice were about 170,000).

Nothing seemed to eradicate it. The Doge Alvise Mocenigo then made a solemn vow that, if the plague had spared the city, he would have built a splendid temple dedicated to Christ the Redeemer and that every year a procession of thanksgiving should have taken place that had to reach the temple, with the Doge himself followed by the Patriarch and all the Lordship.

The vote was dissolved by the doge Sebastiano Venier who gave the task of the project and the construction of the temple, on the Giudecca island, to the architect Andrea Palladio who was assisted by Antonio da Ponte (who later built the Rialto bridge).

After the first stone was laid on the third Sunday of July of 1577, a small wooden church was temporarily raised. To maintain the promise a bridge was built, which stood on 80 galleys and that started from the bank of Piazza San Marco and reached the Giudecca, in front of the church, on which the doge, the Patriarch, the whole Signoria and the various brotherhoods, followed by the people.

The Temple of the Redeemer was consecrated in 1592. Since then, every year he had his catwalk, now called “votive bridge”, 334 meters long that starts from the Zattere and arrives at the Giudecca just in front of the Temple and is set up in the days before the party and dismantled from the following Monday.

The religious festival is inaugurated on Saturday with the blessing of the Patriarch on the steps of the Church; after the blessing the votive bridge is “opened” The popular festival begins on Saturday morning: the inhabitants of Giudecca prepare long tables, on the banks of the Giudecca Canal, ready to be laden with typical Venetian dishes such as bigoli in sauce, sardele in saor, pasta and fasioi, and l stuffed anara. In the evening, hundreds of boats, all adorned with colored balloons, arrive in the San Marco Basin and in the Giudecca canal to watch, in the “famous night”, at the splendid fireworks display that starts at 11.30 pm and ends after midnight. At the end of the “foghi” boats go to the Lido to witness the dawn.

On Sunday morning, along the “votive bridge” the procession begins, preceded by the Mayor, the Patriarch and their retinue, to arrive in the temple where the religious function will be celebrated. Outside, in the open space in front of the church, the party continues among the stalls and fishing that takes place inside the patronage of the Church of the Redeemer.

The grandiose party ends with the Regata del Redentore, on the Giudecca canal.

7.00 pm Opening of the Thanksgiving Bridge, connecting the Zattere to the Church of the Redentore on the island of Giudecca.
11.30 pm. – Fireworks display in St. Mark’s Basin

Regate del Redentore (Regatta of the Redeemer) – Giudecca Canal
7.00 p.m. – Votive Mass at the Chiesa del Redentore on the island of Giudecca